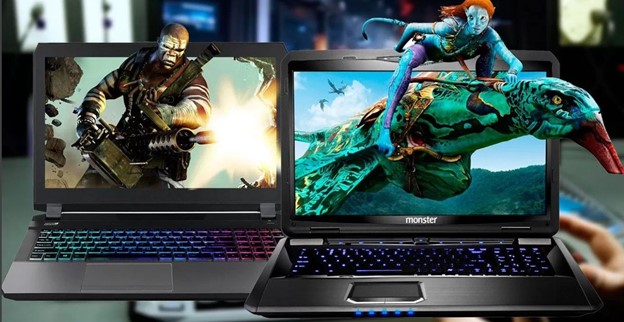 The global gaming laptop industry size is expected to gain momentum owing to the rising consumer spending during the forecast period. It is designed to give players the finest gaming experience possible by playing games at high resolutions and advanced graphic settings. When compared to traditional laptops, they are far better at producing 2D and 3D content due to the greater memory and quicker processor. They also have a large storage capacity and a powerful graphics processor. For instance, in January 2021, Razor Inc, launched two gaming Laptops that use high-performing NVIDIA 30 series of laptops’ GPUs.

The COVID-19 pandemic, which has resulted in lockdowns, has encouraged the growth of online gaming. Virtual domains became channels for networking, interacting, and battling, and hours spent on games increased considerably. The COVID-19 outbreak is causing businesses to switch from desktop computers to laptop computers.

The global gaming laptop industry growth is expected to grow due to the rising demand for innovation during the projected period. Because of the device’s versatile nature, gaming is favored, with people opting for laptops that can be used for both gaming and work. With the recent outbreak of COVID-19, there has been an upsurge in demand for laptops with gaming consoles and several makers claiming an increase in laptop sales that can provide a high-speed gaming experience.

North America is expected to hold the largest global gaming laptop industry share during the forecast period. This is due to the presence of the gamer population in countries such as the United States and Canada.

Asia Pacific is expected to have a sizable share of the industry. This is due to the presence of prominent players associated with manufacturing gaming devices in countries such as India and China. Moreover, the rising popularity of interactive and multiplayer laptop among the gamer population is expected to drive the industry growth in the region.

Manufacturers Focus on R&D Investments to Strengthen their Position

The industry is very competitive, with a few big companies, numerous minor firms, and new entrants. Companies are moving toward supplying technologically integrated products resulting from significant investments in the research and development of gaming laptops.